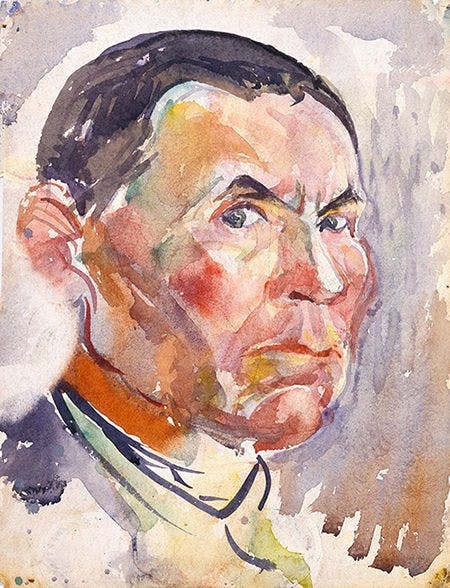 In the collection, we can find 29 works by Ásgrímur, titled Self-portrait. The oldest one dates from the same year he began his studies at the Royal Academy in Copenhagen in 1900. In Danish art museums he had access to a selection of art by many major artists of the continent. Among the works that inspired him were portraits made by the Dutch master Rembrandt van Rijn (1606-1669) where the lighting is an art form in itself. Twenty years of age Ásgrímur regenerates his face with oil colors on the canvas as he looked at himself in the mirror. It also applies to the lasting images the same man, then in his seventies, draws up in an instance, with watercolors. The artist's studio frames these works and creates a personal intimacy.

In one of the oldest self-portraits, painted by Ásgrímur shortly after he began his studies at the Royal Academy of Art in Copenhagen in 1900, his blue, contemplative eyes look at a slanting angle at this serious young man, mildly formed by the brightness from above. The light reflects from the artist's cheek and nose, and suffices for the viewer to discern the form of the face. The informal clothes, a waistcoat and a collarless shirt, along with the ruffled hair, indicate that he is a hard-working man. The artist's look is worried as the future is uncertain.

In Danish museums he came into contact with masterpieces of art. Among the paintings that fascinated him were portraits made by the Dutch master Rembrandt van Rijn (1606–1669), which he later described thus: “But those which affected me most deeply were the pictures by Rembrandt, and especially the portraits. It seemed to me that the beauty and delicacy of these pictures belonged to some higher world and for me their texture was like a richly woven piece of music by Bach” (Ásgrímur Jónsson. Tómas Guðmundsson wrote his memoirs. Reykjavík, Helgafell 1962, p. 130). During his lifetime Rembrandt painted close to a hundred self-portraits where the lighting is an art form in itself.

In a self-portrait painted in the period 1940–1945, the artist turns his cheek to the viewer, sitting in his brown suit with a hat, looking resolutely at the model. The pupils are dilated and the expression is serious. The brightness is stronger and more red in the shadows, the colour tones are warmer. Here we see a trained artist with a sharp eye and a keen ear. Ásgrímur had discovered the music in the colours. He cherished beautiful memories from his youth about his mother singing and he thanked her for his interest in music. The artist not only looks at his environment, he examines it with his eyes. Once he said about one of his favourite places in Iceland, Húsafell, that “there the environment had a clear but stern look as if you were in the wilderness although it is in an inhabited area” (Valtýr Stefánsson, (1942): Nokkrar minningar Ásgríms Jónssonar málara. Lesbók Morgunblaðsins, 392).

The watercolour picture, Self-portrait (1947), is boldly painted with strong contrasting colours. In reddish brightness the shadows turn green. The artist's trained eyes discern the colours in the shadows like the German poet Goethe, who wrote about his experience of colours in nature at various times of the day in 1790–1832. Ásgrímur interprets the model ecstatic with these ravishing elements of light and colour. The sparkling blue eyes critically watch the signs of age appearing, a dark streak by the eyebrow has its story to tell. The glance follows the viewer long after he has left the room and the feeling that one has made eye contact and come into connection with the artist lingers for a good while. It is as if the eyes, this mirror of the soul, communicate the calmness of a man who knows that everything is mutable and therefore accepts all things as they are – like Guðrún in the folktale The Deacon from Myrká, when she realizes that the man sitting with her on the horse is a ghost, and answers his question with these words: “I see that which is.”

In the self-portrait from 1947 the artist looks attentively at himself at the age of 73, the red nose, high cheekbones and dark knitted brows. Here we see a kind of madness, staring eyes and the pupils have shrivelled. The expression is strong and quite similar to the one of the grinning faces of the trolls in some of the artist's works. They turn to stone if the sunlight catches them, but what is there to fear? Both of the artists that Ásgrímur admired most, Rembrandt and Vincent van Gogh, used the self-portrait as an interpretation of colours, light and shadows and even as a way leading to deeper knowledge of the self and Ásgrímur was probably aware of the meaning of such an activity, just like those who nowadays systematically take selfies.

Art in a changing world